Description: The loud sounds of dishes being washed are present during the entirety of the track. Listeners hear the sounds of spraying water and the clattering sounds of dishes making contact. The track is also layered with indistinct conversation—similar to the energetic din one might hear in a busy restaurant. Toward the end of the track, listeners hear the whistle of a tea kettle go up in pitch and volume, and then back down. Finally, the “ding” of a timer goes off, followed by the sound of a screen door opening and closing.

The two “sonic palate cleansers” that were played—one between the appetizer and main course, and one between the main course and dessert—provided time for students to clear away one part of the meal and bring the next. In a culinary context, a palate cleanser is “designed to remove any lingering flavors from the mouth so that the next course may be enjoyed with a fresh perspective” (Franklin). Similarly, these short audio compositions were intended as reinvigorating transitions that would sonically prepare diners for a new part of the meal. Sonic palate cleansers exposed diners to new sounds that distanced them from the previous course and signaled that a change was about to occur. In the case of sonic palate cleanser #1, the team’s visual and sonic design was meant to indicate a transition from inside to outside—from the intimate domestic space sonically represented by the appetizer team to the backyard. The sounds of washing dishes in this track served as a metaphor for palate cleansing—for rinsing the palate clean—and the track’s loud and raucous nature was meant to reinforce and amplify the change that was occurring on the table itself (students were clearing dishes from the table and bringing new ones).

The tea kettle and timer sounds were used to heighten anticipation and signal that the main course was ready. These sounds were also audible in the appetizer track, and listeners will notice that certain sounds are repeated in all of the soundtracks associated with the meal. While it was important for the sonic palate cleansers to prepare diners for something new, they still needed to seem connected to the meal as a whole. Early on in the design process, each of the teams consulted with each other about how to create a sense of continuity. They decided that using sonic patterns or motifs was an effective way to unify the experience for diners.

Additionally, the sonic palate cleanser team put a significant amount of thought into the visual design—a major responsibility for their team since the palate-cleansing soundtracks were substantially shorter than the soundtracks for other parts of the meal. For example, the big visual transition that occurred in this segment of the meal was the removal of the top table cloth, which revealed a faux wood picnic table.

The team put a lot of thought into the design of the menus as well. They decided to handwrite the menu on old stained recipe cards to reinforce the intimate domestic ambiance of the event. Each part of the meal had its own card and the cards were bound together with yarn. 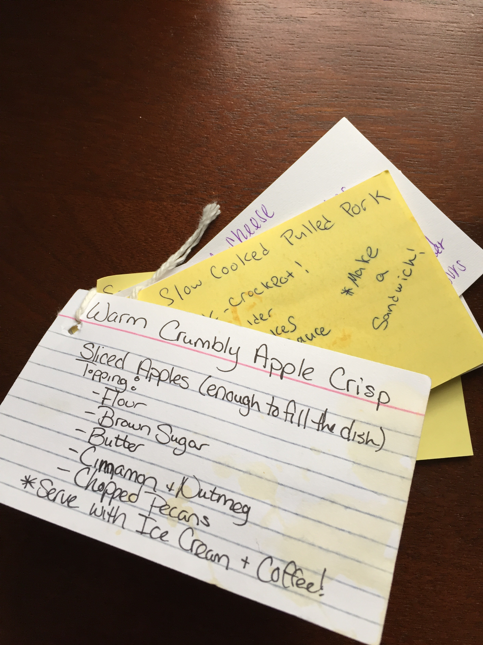 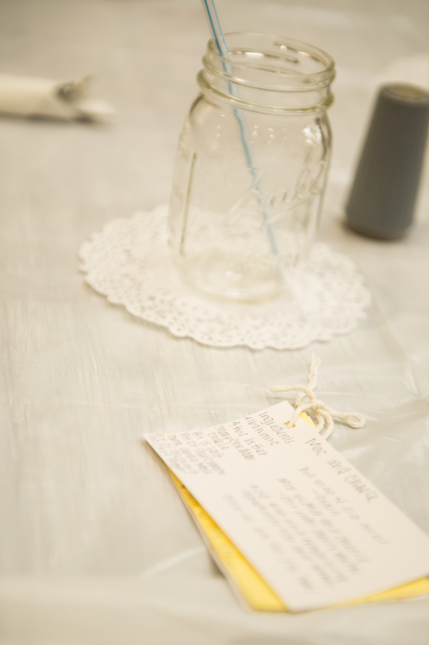 The menus were left on the table throughout the meal. This was an important detail because, according to the team, allowing the diners to actually see the language would be crucial to the intensification of their multisensory experience. Along with listing the food itself, then, each recipe card listed the main ingredients that were used to prepare the food. As the team concluded in their artist statement, “Studies have shown that providing a name for a dish before tasting the food has more of an effect than providing the name after it has been eaten (Spence and Picqueras-Fiszman 298). This is due to the notion that people tend to rate flavors [and textures] that they can name as being more intense than the other elements in the dish…. Whether it’s the savory pork, crunchy coleslaw, or the crumbly apple crisp, we believe exposing the diners to these flavors beforehand will make their tastes more intense.” Readers who frequent craft breweries or wineries have probably experienced this effect when reading tasting menus before imbibing. When a menu states “notes of wood smoke” in the wine you are about to drink or describes your beer as “hoppy with notes of citrus,” you are more likely to think you detect those flavors—even if you don’t truly taste them.

My students’ sensitivity to the menu descriptions highlights the ways that rhetoric is able to attain its forces and effects through, among the various modalities I’ve already discussed, the power of language. George Lakoff and Mark Johnson most famously tackled this subject in their 1980 text The Metaphors We Live By. In that text, the authors argue that metaphors often unconsciously structure our perceptual engagements with the world. Many researchers have since drawn from and demonstrated the reach of Lakoff and Johnson’s work. For instance, Paul Thibodeau, James L. McClelland, and Lera Boroditsky did a study on how common metaphors for describing crime (“crime as a predator” and “crime as a virus”) have a profound role in shaping social policies. They write, “When crime was compared to a virus, participants were more likely to suggest reforming the social environment of the infected community. When crime was compared to a predator, participants were more likely to suggest attacking the problem head on—hiring more police officers and building jails” (814). In short, the study found that policy decisions, which have real and serious consequences, are (often unconsciously) informed by the ways that crime gets talked about. Clearly, language influence the ways that people think about, experience, and take action in the world. Through our discussions about menu language, my students learned that words play an especially salient role in sensory persuasion.

Ambiance was also a major concern for this team. They wanted to find a way to transform the space of the classroom to feel like an outdoor space. In their artist statement, they cited a study about how the lighting in restaurants can significantly improve the ratings of meals (Spence and Picqueras-Fiszman 298). In order to enhance the atmosphere and the diners’ experience, then, the team experimented with the room’s lighting options. As they explained in their artist statement, “We strung Christmas lights around the table in order to cut back on the direct light. We also employed battery operated candles, since fire candles are banned, to add to our relaxing and comforting atmosphere.” The team dimmed the lights slightly during this transition (and the lights continued to fade during the main course). The lighting helped diners understand that a change was about to occur in terms of the menu and the environment in which they were situated. The lighting, visual design of the table, and soundtrack worked in sync to transport diners to an outdoor picnic atmosphere. 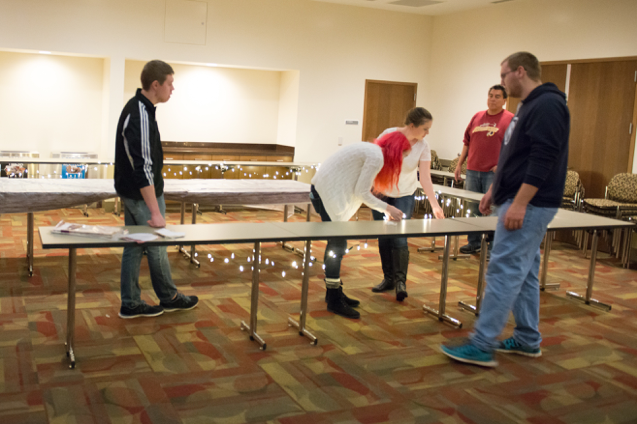 Students stringing Christmas lights around the dining table during set up. 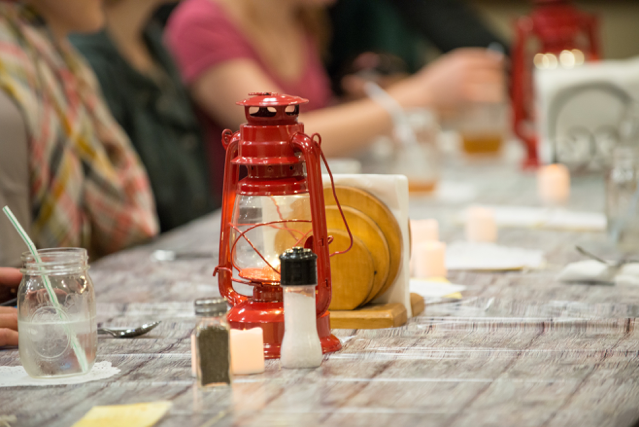 The tablescape contributed to the outdoor picnic vibe.

In their artist statement, the team felt compelled to write about the limitations of what they were able to do design-wise. Due to scarce resources, they were not able to execute their design in the complex ways that they initially imagined. “For example,” they wrote, “more dynamic control of the light, video, and sound systems would each help enhance the atmosphere we were trying to create.” Students only had access to the technology already available in the classroom (a standard tech set up with a projector, sound system, and speakers). They claimed that having access to more sophisticated technologies for the design would have resulted in a “more immersive and complete” experience.

Despite these constraints, however, the team believed that they were able to accomplish and learn a great deal. As they wrote in their artist statement, “We can all agree that this has been the most immersive composition project that we’ve ever been a part of. Since each detail had to be so intentional and specific, we had to think more about every decision we made than we had previously. This was a very new experience for all of us—to have to consider so many sensory perceptions with each aspect of the presentation. The multisensory nature of this project has, as a result, drastically expanded our idea of what a composition can be. It also changed our previous ideas of ‘sonic composition’ to extend past just a piece of music or a cinematic soundtrack. We’ve learned that there are loads more ways to think about sound.”