Description: The track begins with the sounds of windchimes, followed by a sizzling noise with clattering pans. Listeners then hear what sounds like far-off traffic noises mixed with birdsong. A tree branch breaks and falls. A dog barks. The ambient noises fade into the steady rhythm of someone walking through dry leaves, making a loud crunching sound. A tweeting bird and a woodpecker can be heard during this crunching. There is a fade out to a few moments of silence, then a slow fade in to the repeated sounds of far-off traffic noises—it almost sounds like a white-noise machine. The traffic noise is punctuated by insect noises, sporadic birdsong, the subtle rustling of bushes, and light footsteps. Then these sounds drop out and are replaced with a lengthy stretch of calm crickets and a slowly crackling fire. Listeners hear an indistinct animal cry in the distance. The crackling fire fades out. 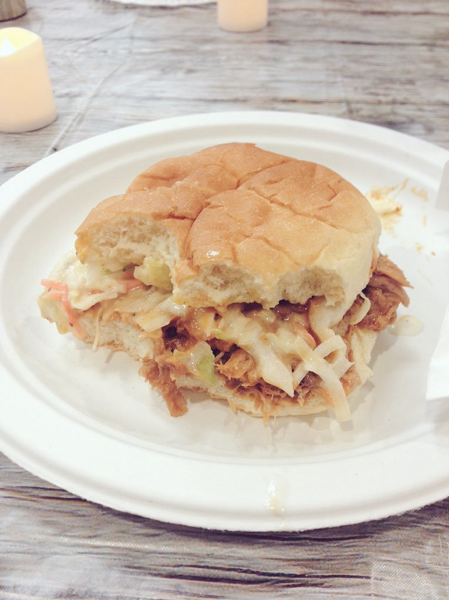 Pulled pork sandwiches with coleslaw—the main course up close and from a distance. 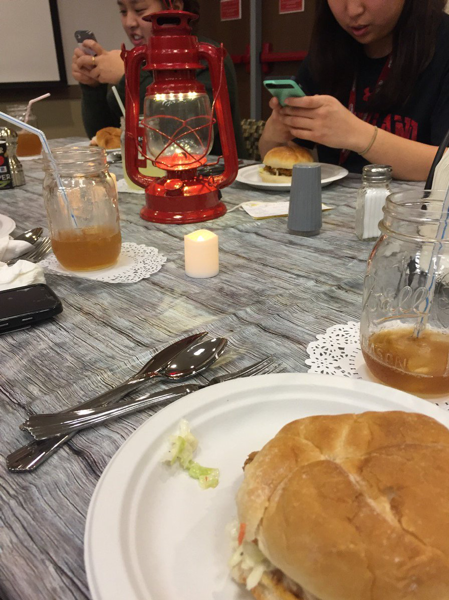 Picking up where the sonic palate cleanser team left off, the main course team took diners deeper into the night. In their artist statement, they wrote, “Our main goal when creating our sonic composition was to create a sense of place while still abstracting it enough to give us some liberty in our creative decisions.” Team main course’s soundtrack highlighted sounds one might hear in a backyard—the whoosh of traffic from a distance, animals and insects, a crackling fire. Additionally, during the live performance, one of my students (David Coursey) played an acoustic guitar along with the digital soundtrack. The team noted, “The addition of live music allowed us to create the diner’s experience in real time…. We wanted the composition for the guitar to be something that was relaxing and melodic, allowing the diners to enjoy their meal and company without drawing too much attention to the music of the guitar player. We also wanted it to sound very campfire-like, like someone was strumming along while people ate and talked.” The team’s digital track was purposefully sparse in order to give the guitar player space to improvise. 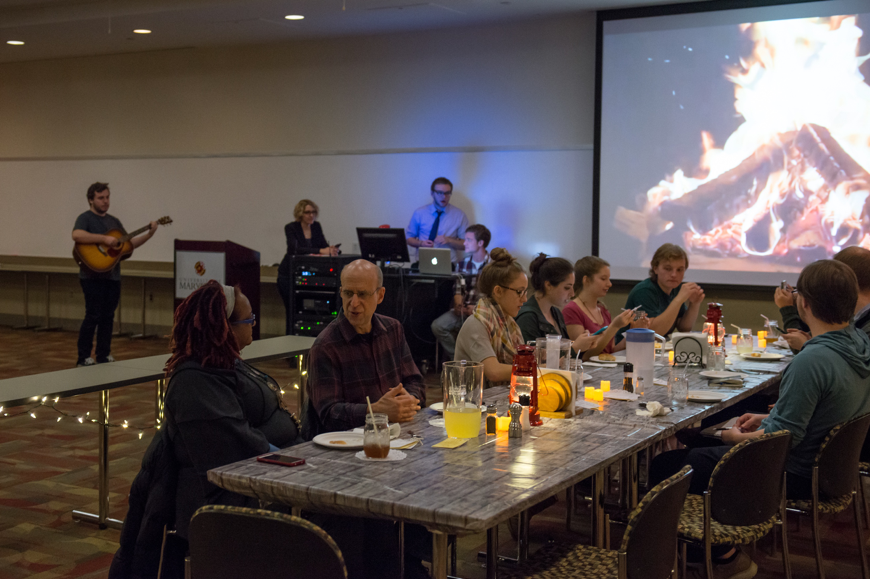 In addition to the ambiance created by the digital and live sound, the team chose to slowly fade out the lights over the course of the meal to indicate a transition from day to night. They also projected a crackling fire onto the projector screen at the end of the table. 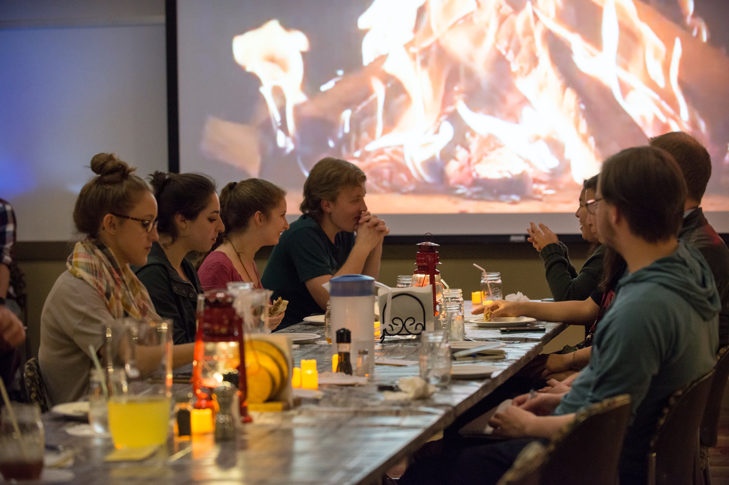 This dramatic use of lighting, visual media, and sound truly transformed the space—so much so that many diners reported that they forgot they were in a classroom at all.

Food science research informed many of the main course team's rhetorical choices. For example, they cited Spence and Piqueras-Fiszman in their artist statement to justify the team’s attempt to bring out the sweet flavors of the mayo-based coleslaw and the barbeque sauce by using high-pitched birdsong (324). They cited additional findings from The Perfect Meal, such as "Loud music (or noise) can impair a person's ability to detect the sweetness and saltiness in food" (295) and "medium tasters will choose a tone of 80 decibels [to taste sweetness]" (327). As the team explained, "Because the main course involves both sweet and salty tastes from the pulled pork and coleslaw, we decided to use quieter sounds that weren’t too loud. That way, the diners would not have their abilities to detect the sweetness and saltiness in food be impaired as they eat.”

And, in one of their more creative sonic decisions, the team used the sounds of crunching leaves to bring out the crunchy texture of the coleslaw (Spence and Piqueras-Fiszman 194-95).

The main course team was very interested in how sound—along with their other design elements—would “affect the ways our subjects would taste, experience and perceive the meal we serve them alongside the track.” However, they also recognized the important role of silence (or near silence) in their design: “[C]reating a period of silence to encourage reflection or curiosity in the track is just as much part of the composition as inserting the sound of crunching leaves” to enhance the texture and feel of food. The team’s minimalist approach to the soundtrack was effective because the sound did not overpower the rest of the sensory design. Rather, the ambient soundtrack worked to balance and blend with all of the other sensory elements students crafted.