Description: The track begins with a loud doorbell sound. Listeners then hear someone warming up on an acoustic guitar, strumming chords and plucking strings in an improvised melody. The guitar sounds are layered with the sounds of pasta being boiled (in this case, the pasta for the mac and cheese), followed by the metallic sound of the lid being placed on the pot. The guitar continues as the low hum of the TV show Jeopardy! plays in the background. The doorbell rings again, indicating that more guests have arrived. The loose but repetitive guitar melody and the muffled sounds of Jeopardy! continue for the remainder of the track. Sporadically, these sounds are punctuated by the whistling of a tea kettle, the ding of an oven timer, the clattering and scraping of pots, plates, and silverware, the pouring of water, and a running dishwasher. Near the end of the track, listeners are once again left with only the guitar melody and Jeopardy! sounds, which slowly fade out. 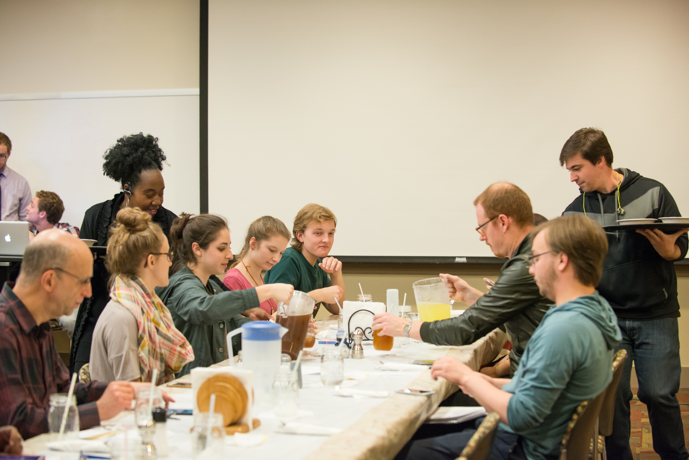 Students serving the appetizer course to our participants.

The sounds during this portion of the meal are meant to create the ambiance of an intimate domestic space. According to the student team’s artist statement, homemade mac and cheese is the “ultimate comfort food.” Thus, their aim was to translate the feeling of the food via sonically evoking the feeling of a warm and cozy gathering at someone’s home. This goal proved to be difficult at first. For example, in an early draft of the appetizer soundtrack, the team experimented with classical music—something they associated with calm and relaxing environments. They also used the sounds of a crackling fire and human voices, including children’s laughter, to add warmth.

Description: The track begins with a loud doorbell sound followed by forceful footsteps and children’s laughter. Listeners then hear a mix of conversation and radio static before the sounds of a crackling fire and somber classical music fade in. The conversation, which includes multiple male and female voices, is too muddled to decipher. For a period of time the conversation sounds are layered with the fire sounds and classical music, occasionally punctuated by clinking silverware, radio static, and a loud male voice. The classical music and fire sounds fade out and are replaced with radio static, which eventually turns into more upbeat instrumental piano music that includes an acoustic guitar near the end of the track. The music and conversation sounds continue as dishes rattle and silverware clinks sporadically. Listeners hear a baby whining and fussing, children laughing loudly, what sounds like a child’s rattle, pasta boiling, and the mild whistling of a tea kettle. The track ends with the abrupt sound of a child’s rattle.

During the review of this draft, their peers claimed that the somber classical music felt sad and cold as opposed to comforting, and the crackling fire and conversations made it seem like the soundscape for a hotel lobby or possibly a tavern. To sonically signal a more intimate space, then, the team decided to focus on sounds that people might associate with being at home (e.g., the sounds of a kettle, plates, dishwasher). They were particularly proud of the Jeopardy! idea because TV sounds tend to be an ambient presence in many homes. However, the domestic soundscape they created still needed an element to give the soundtrack some cohesion. After consulting with their peers, they decided to use an acoustic guitar melody played and recorded by David Coursey, one of their classmates. The sound of an acoustic guitar, they argued, provides a welcoming and laid-back tone—almost as if someone was tinkering with the guitar while lounging in a chair waiting for dinner to be served.

In terms of incorporating food science, the team was inspired by a discussion of sound, freshness, and texture in The Perfect Meal. For instance, they were fascinated by a study which found that the “auditory feedback” one gets from eating a chip actually influences the eater’s perception of the crispiness and crunchiness of that chip (Spence and Picqueras-Fiszman 194-95). In other words, the louder the chip, the fresher it seems. They decided to apply this concept not to the food itself, but to the environment. The team hypothesized that including the sounds of a meal being prepared—dry pasta falling into a pot, boiling water, rattling plates, etc.—would enhance the diners’ perception of the quality and freshness of the mac and cheese.

They were similarly inspired by research on food and visual cues, citing Spence and Picqueras-Fiszman: “visual cues play an important role in multisensory flavour perception … changing the colour of a food can alter its taste and flavour” (196). One of the reasons that the team chose to put mac and cheese on the menu was because of its color. The orange-yellow hue of the pasta, according to the team, “provides warmth” that reinforces both the temperature of the food and the feeling of the soundtrack. The team also decorated the table with knickknacks such as rustic lanterns, mason jars, and napkin holders to visually create the kind of domestic vibe one might experience when eating a picnic-style meal at a relative’s house. 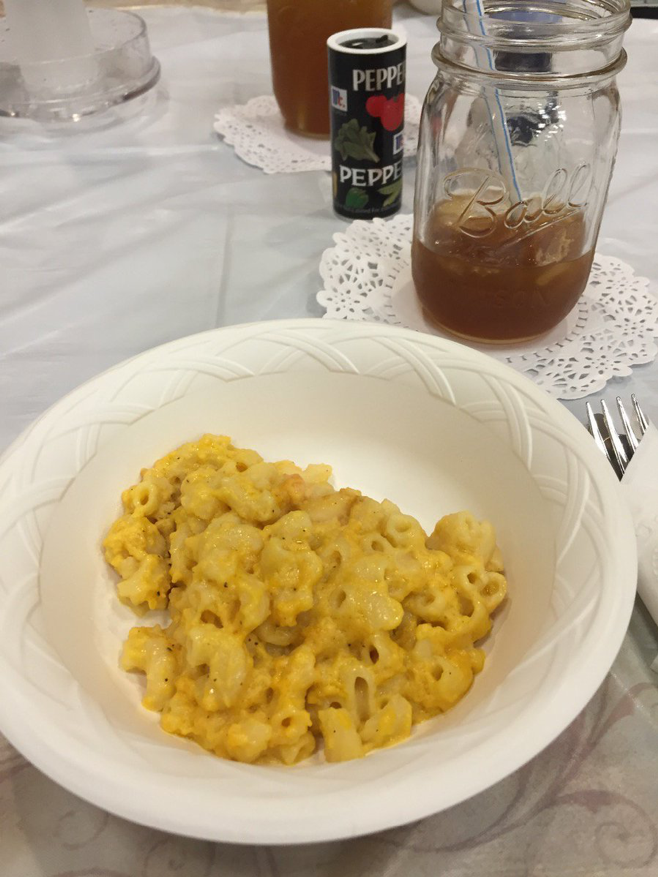 A close-up shot of the mac and cheese appetizer.

While in general this team was pleased with the way that the appetizer portion of the meal turned out, it did not go exactly as they had expected. For instance, one thing that the team failed to consider was the amount of noise that the diners themselves would contribute to the soundscape. The conversation of the diners often overpowered other sounds, which caused the diners to miss some of the nuances of the appetizer soundtrack. For example, not everyone heard the water boiling or the clattering plates. However, despite not hearing every detail of the soundtrack, the diners still reported that the appetizer portion of the meal made them feel relaxed and cozy. Clearly, the team’s food science experiment (i.e., using the boiling pasta to influence diners’ perception of freshness) was not successful—or noticeable—in this case. What the team learned, though, is that minor details do not matter when designing an ambient soundscape meant to evoke a feeling. Rather, the holistic, cumulative effect of the sounds in relation to all of the other sensory aspects of the meal and environment is what matters most.