Description: The crackling fire and cricket sounds continue throughout this track, as do periodic sounds of windchimes. After some time has passed, listeners hear the familiar acoustic guitar melody return, drop out, and return again. Between the sounds of windchimes and the guitar melody, there are long stretches of just the sounds of fire and crickets, which eventually fade to nothing. 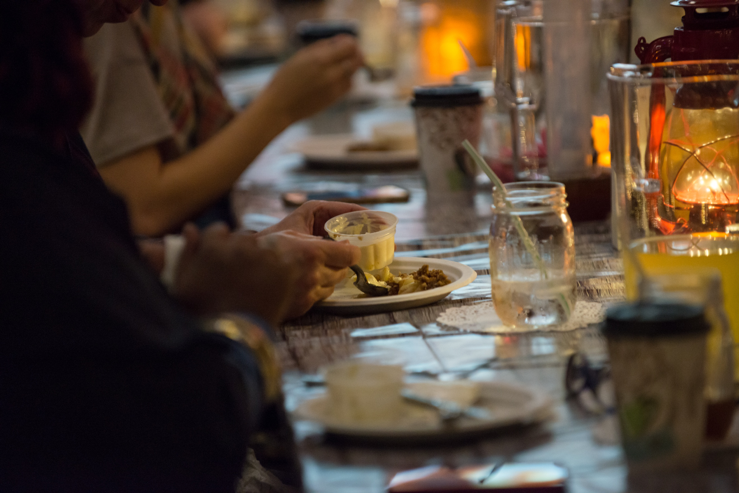 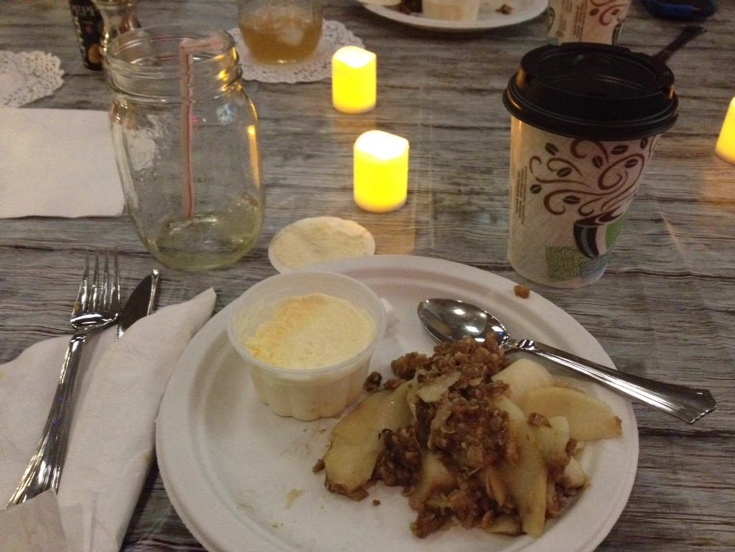 While the final version of the dessert team’s soundtrack was very sparse and stripped down, it was not that way initially. The first draft of their track was much busier. It included piano music and the sounds of human voices—a combination that was intended to ramp up the ambiance of the party.

After talking with their peers, however, the team decided to go in a different direction. Because this was the final part of the meal, their peers urged the team to create a tranquil and peaceful ending to the evening. The entire point of the meal was to evoke feelings of comfort, and the class agreed that the team’s first attempt detracted from this purpose.

Though it took some convincing, the team realized that the sounds used in their first draft were too raucous and attention-grabbing. In their artist statement, they cited advice from sound designer Ben Houge: “The sound is there to enhance and supplement the meal, not to supersede or distract from it” (“Food Opera”). Ultimately, the team decided to recycle just a few key sounds from other parts of the meal in order to establish sonic continuity and cohesion. The simplified track was intended to lull diners into a sleepy, comfortable state as they ate their dessert. The more careful selection of sounds also worked in their favor, as the high-pitched windchimes and cricket noises could potentially trigger a heightening of sweetness as diners spooned up their apple crisp and vanilla ice cream (Fleming).

This minimalist approach carried over to the visual design of the dessert portion of the meal. At this point, the room was dark except for the projected crackling fire. It made sense, then, that the fire was the most salient sound on the track. Additionally, the only table decorations the team used were several baskets of fresh apples. They hoped that actually seeing the main ingredient used to make the apple crisp would make diners sensitive to the fresh, homemade quality of the dessert itself. This idea was inspired by Heston Blumenthal’s “Sound of the Sea”—an experiment I discuss at length in "Enlivening Sonic Composition"—which features seashells and other beach-like visuals to enhance the experience of a seafood dish (“Seafood Served with an iPod”). 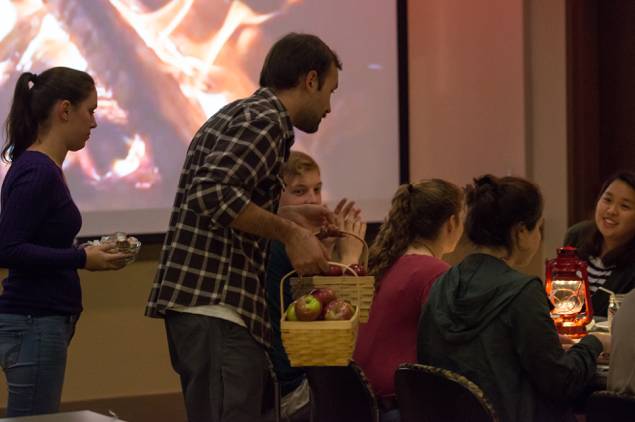 Students deliver baskets of fresh apples to the table. 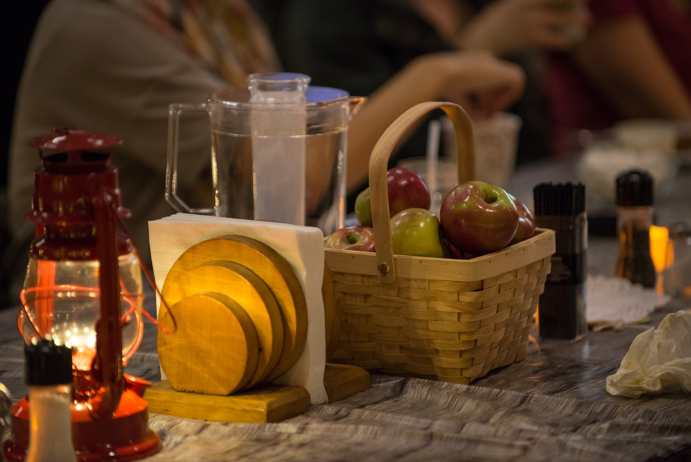 The students on this team were also very aware of the role that language plays in the experience of food. In consultation with the second sonic palate cleanser team, the dessert team decided to list their menu item as “Warm Crumbly Apple Crisp.” They believed that this specific language would make diners more aware of the sensual qualities of the dessert, citing Spence and Piqueras-Fiszman in their artist statement: “our response to food is driven to a much larger extent than many of us ever realize by the way in which those items are described; this includes how they are named, labeled and what sensory descriptive terms are used” (69). Drawing attention to the temperature and texture of the apple crisp, the team thought, would further enhance the diners’ level of satisfaction and comfort. Once again, decisions about multisensory rhetorical effects/affects were informed by the power of language.

In general, the team was very interested in the relationship between multisensory composition and writing. In their artist statement, they mentioned that the holistic approach involved in the design of the dining event was new to them—they had never been asked to think about things like smell and texture in an academic environment. That said, they noticed some similarities as well. They claimed that in both forms of composition, composers must rely on their “world knowledge and experience” to be able to convey an experience to others. The team keyed into the importance of drawing on one’s previous experiences—with food, sound, etc.—during the process of composing, broadly conceived.